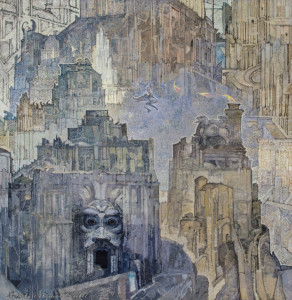 Raffaele De Rosa was born in 1940 in Podenzana (MS) in Lunigiana, where he spent the first six years of his life in the villages of Pomarino and Pallerone. This period left an indelible mark on his adult painting. At the age of 16, he arrived in Livorno where he attended the Scuola Trossi without, however, identifying with the neorealist langua­ge pursued there. In 1971, the artist started to develop the style most congenial to him – fantasy painting. Figurative and literary references can be traced in De Rosas image­ry – from the surreal representations of the heroic world of Paolo Uccello to the engravings of Piranesi with their impressive architecture, the fantastic levity of Ariosto and the utopian feel of Italo Calvino s heraldic trilogy. These re­ferences originated and proliferated in his memory of the folk legends of his childhood spent in Lunigiana. 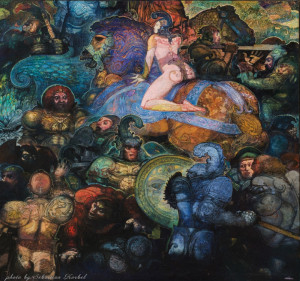